Can I put Association brackets <| … |> in an autocompletion template?

I have a function f which takes as one of its arguments an Association object, and I would like to produce a nice usage message for it, including a proper autocomplete template.

As an example, consider the function

and it formats nicely when I ask for ?f. However, if I try to use the template for autocomplete using Ctrl+Shift+K, I get the following: 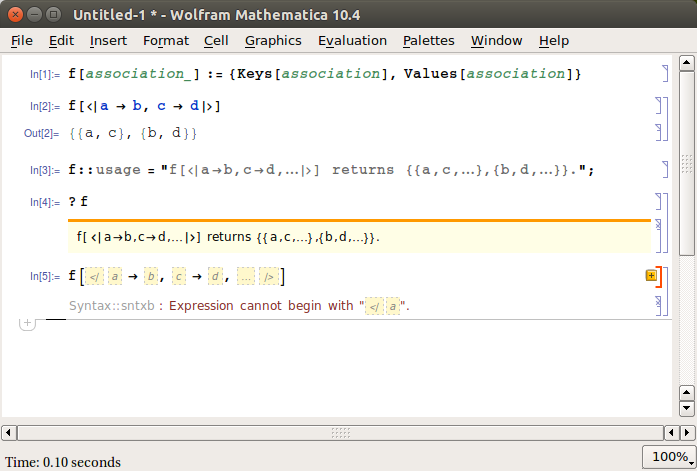 Note, in particular, that it's somehow turned the Association symbols <| and |> into patterns to be filled in, which is obviously not the desired behaviour. This is a bit strange, particularly since <| is described by its documentation as a

much like { or ⌈, so it cannot mean a template for some other variable. Moreover, this is independent of whether the separated form <| (i.e. < then |) or the single-symbol \[LeftAssociation] is used in the usage message string.

Is there some way to make the produced template include correctly-formatted <|s and |>s?

associations built-in-symbols autocomplete
Share
Improve this question
asked May 4 '16 at 17:54

No, I don't think it's possible. The reason is that built-in symbols are plagued by the same problem.

I would actually consider this a bug. It's confusing and hinders usability. Plus, other operators, such as ->, are not turned into patterns.

Not the answer you're looking for? Browse other questions tagged associations built-in-symbols autocomplete or ask your own question.

40
What is the status of `::usage` and Templates in Mathematica v11?

12
How can I overload autocompletion to work with full contexts?
14
Fractional Keys in Associations
11
How to add symbols to autocompletion list
11
A comprehensive list of all correct input formats for [[experimental]] Neural Net functions?
10
User defined template completion with symbols instead of placeholder
2
Using Case to pull Keys and Values out of a nested Association
1
Why can't package call imported association list?
4
Boxes with autocompletion