I have a notebook in which a couple of partial derivatives are calculated.

At the time of publishing this notebook, I'd like to make the resulting equations look the way they would in standard scientific and mathematical writing. Converting the cells in question to TraditionalForm helps, but falls short of the desired result. The problem is that, in the notebook, what would be traditionally an equation's left- and right-hand sides get split over two ("input" and "output") lines: 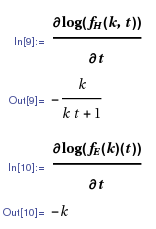 Is there a way to make this look like this?:

Of course, I know that I can get typesetting like the one shown immediately above from Mathematica. In fact I produced this image by cutting and pasting into a new input cell the TraditionalForm versions shown in the first image, sticking an equal sign in-between the LHSs and RHSs, and getting rid of the boldface. But the result is no longer evaluatable. What I want to know is if there is a way to keep the LHSs evaluatable, but have the output appear to the right of the input, after an equal sign.

(For those who are not very familiar with Mathematica, the question above my seem unreasonable. One has to keep in mind that one of the most consistent themes in Mathematica's history has been to make notebooks approximate as much as possible the literate programming ideal of an "executable essay". The question above is about how to make something that is both executable and has the appearance of a typical mathematical-formulae-containing scientific essay. Then again, the structure of vertically-arrayed cells has been a feature of Mathematica for as long as I can remember, so I realize that what I'm asking for here, however much it may conform with Mathematica's overarching design ideals, may be just too difficult to implement.)

EDIT: The originals of the cells shown above are the last two input-output pairs below. (The code immediately below is an image! I give text versions the input further below. The input shown in the image is as I typed it, and differs from the text versions of the input given later.) 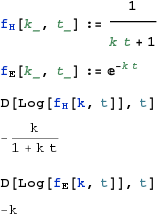 FWIW, here's some code that you can cut-and-paste (although it is not what I actually typed):

You can use Row to accomplish your task. HoldForm needs to be wrapped around the first part.

Copy of your code:

You can style it as you like. Below is a silly example just to get the point across.

To get the E without it being interpreted as the natural log base try:

Using Row gives you a lot of power. You can insert space (e.g., Spacer[20]) wherever you like and hide the input line by double clicking the output in a notebook.

9
A notebook created on demand from a main document showing executable input along with output cells
1
How to convert equations to piecewise form
8
How to convert expression with Subscript to string
4
How to print unevaluated arguments in the form they were originally typed in?
5
How to bring back the default font sizes for In, Out, et cetera
7
When is it unsafe to use TraditionalForm output in subsequent input?
5
How to generate images of mathematical equations?