Behavior of ArcTan when two zeros are given as arguments

I've noticed that the numeric approximation of ArcTan is a bit different from the symbolic one.

While if I write

Instead I expect to obtain also in this case an indeterminate result. Is there some specific reason for this behavior?

J. M. has noticed also this:

but it does generate an output:

I ran into this problem while working with some code in V10.3. I found this question (obviously), but since the V10.3 behavior is different, I thought I should edit the and report that behavior. -- m_goldberg 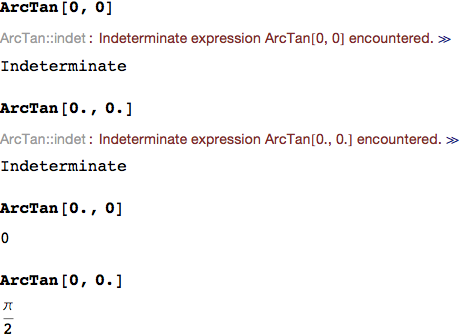 When you write ArcTan[0,0], you tell Mathematica that the parameters x and y in ArcTan[x,y] are the exact integer 0. As we know, 0/0 cannot be unambiguously defined, and Indeterminate is returned. So ArcTan[0,0] returns the result of Interval[{-Pi,Pi}], for the codomain of ArcTan[0,0] is just between -Pi and Pi.

Now, consider why ArcTan[0.,0.] returns Interval[{-Pi,Pi}], similar to ArcTan[0,0]. For this question, we must first keep it in mind that every approximate real numbers in Mathematica has its finite precision and accuracy. The default precision in Mathematica can be obtained by $MachinePrecision, which is 15.9546.

So, in the default setting, the paremeters x and y in ArcTan[0.,0.] have the same precision. Let me draw an analogy: when x and y have the the same precision 10,they can see each other the same effective number of digits, that is, the first 10 numbers of x and y are all 0. As for the 11th number and those after that, Mathematica did not take them into account when calculating, since those numbers are out of the precision and ambiguous. As a result, ArcTan[0.,0.] involves the situation 0/0, returning Indeterminate.

The above analogy may be inexact, but in short, the phenomenon in question is related to the precision of real numbers in Mathematica.

If you expect to obtain in the case of ArcTan[0.,0] an indeterminate result, you can use Chop function. ArcTan[Chop[0.],0] returns Indeterminate.

Hope this will help you.

I think you get this result because for Mathematica handles 0.0 here as a number which approaches 0.

But if you use

Not the answer you're looking for? Browse other questions tagged trigonometry or ask your own question.