How to know the meaning of a `EntityProperty`

I don't know how to get the meaning of a certain EntityProperty, such as the "Ceiling" of "Aircraft". Maybe you can press F1 to arrive at the documentation of AircraftData, where that particular property is described in the Details section. 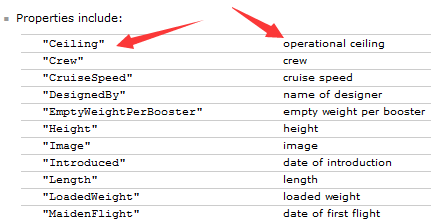 But I want to get it programmatically, using a code method. Can this dream come true?

Furthermore, I find that a lot of EntityProperty of a certain Entity are undocumented, such as the "Price" of "Element", which you can obtain like this: 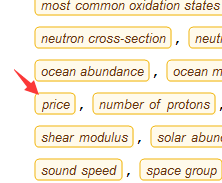 Or the "work function":

But what is the meaning of these EntityProperty entries?

The "Concept" type have a EntityProperty similar to my desire.

This EntityProperty of "Concept" can illustrate what is this entity.But my final target is know what is any EntityProperty.Such as the "Format" in type of "Periodical" mean what?Unfortunately the type of Periodical have no explanation in documentation.And not all of these EntityProperty is self-explanatory.

The extent to which the distribution of income among individuals or households within an economy deviates from a perfectly equal distribution. A Lorenz curve plots the cumulative percentages of total income received against the cumulative number of recipients, starting with the poorest individual or household. The Gini index measures the area between the Lorenz curve and a hypothetical line of absolute equality, expressed as a fraction of the maximum area under the line. Thus a Gini index of 0 represents perfect equality, while an index of 1 implies perfect inequality.

Of course,you know GiniIndex just by first glance,But in some obscure case,this solution will help you a lot.

This is more of an extended comment than an answer.

I would not take the value of Ceiling given in Wolfram's curated data very seriously. At best it is a nominal number set by the aircraft's manufacturer or by a government agency. Further, for many aircraft which had long manufacturing runs, operational ceiling will vary as improvements are made during the manufacturing life cycle. For the number to be useful in a serious application, you would have to know the provenance of the information used to establish the datum given, in particular, the date on which the quoted value for operational ceiling was established, what model was used for the test, and what were the test conditions, particularly, what was the take-off weight.

Here is a specific example showing the kind of variations that can be expected. I have a monograph on the Republic P-47 Thunderbolt, a WW II US fighter. It gives the operational ceiling of the early model P-47B as 36000 ft., while the late model P-47N achieved 42000 ft. Wolfram gives the P-47's ceiling as Quantity[42979., "Feet"], which I suspect was only achieved by a late model undergoing testing and not carrying a standard battle payload.

to get Wolfram's value.

Not the answer you're looking for? Browse other questions tagged entity or ask your own question.

0
How to know the meaning of EntityProperty of an Entity