This is fixed for in version 10.3 by disabling interpolation in the PDF (see Romwell's answer). However, Preview.app on OS X simply ignores this flag. Thus, in practice, the problem remains for all but small matrices. Systems other than Mathematica are also affected by this Preview.app problem.

[The following problem occurs on OS X; I don't know if it also occurs with other OS's.]

If I produce a Graphics object with ArrayPlot, right-click on it, choose "Save Graphic As...", and save it as a PDF file, the resulting PDF graphic is absurdly fuzzy/blurry (which is particularly perverse, considering that it is among the simplest kind of graphics (all solid-color squares with vertical and horizontal edges).

For example, in the PNG screenshot below, one such figure is shown in the Mathematica GUI (on the left), and the PDF file exported as described above (and displayed at "Actual Size" magnification with the Preview app) is shown on the right: 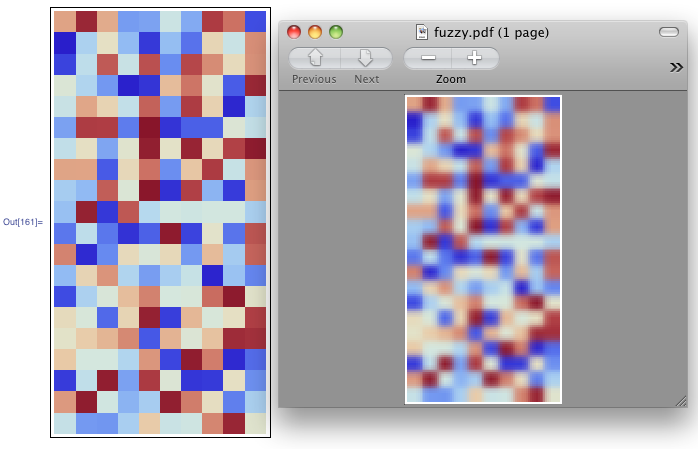 (Actually, the screenshot of the original on the left looks fuzzier to me than what I actually see on the screen, but that degree of fuzziness is nothing compared to what the PDF looks like.)

As I understand it PDF is the native graphics format for OS X. It should be possible (not to say trivial) to save this very simple graphic as a PDF in a way that preserves all the edges and corners to infinite resolution.

Does anyone know how?

PS: FWIW, I did try displaying the Graphics object above with Style[#, Antialiasing->False]&, but this change had no effect, either on the resulting PDF nor on the object's appearance in the Mathematica GUI.

This is a problem with Preview, the PDF reader included in OS X. The problem does not show when using other PDF readers (not based on PDFKit) such as Adobe Reader.

To prevent blurring you just need to untick the "Smooth text and line art" checkbox under "Viewing documents" in Preview's preferences: 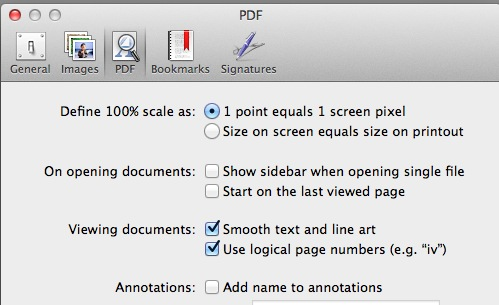 However, this will lower the quality of text and line art as well.

Actually, the problem is with Mathematica's export, at least with Version 10.

I have been saving a file wit MatrixPlot (using Save As...-> PDF), and have encountered the same problem.

Turns out, MatrixPlot (and similar) data is being exported as a bitmap, which gets blurred in Adobe Reader 9 (which I have), even if "Smooth line art" and "Smooth images" is unchecked in preferences. The PDF showed fine in Okular, but that is probably just the lack of smoothing in that viewer.

I have found the solution on Inkscape forums. Open the PDF file in a text editor, and locate the following line:

Change it to the following:

Et voilà! The problem is solved, and the PDF shows fine in Adobe Reader, without blurring.

I have not found a setting in Mathematica to affect the value of this option on export to PDF.

In version 9 of Mathematica, if you export the graphics by right clicking and choosing Save As..., the problem does not occur. Unfortunately this will cause other problems. It's a tradeoff you need to consider.

If the figure is simple enough, it may be a good workaround, but keep an eye on the width of the frame and tick marks: they may be off.

33
Graphics elements do not line up perfectly in exported PDFs
11
BarLegend can't make spaced contours when contours number>11
14
Export MatrixPlot graphics to PDF
15
Upon PDF export, edgeless rectangles do not tile perfectly, and corners may be cut. Is this a bug?
6
Ugly plots when printing notebook to pdf
4
Remove Resolution Limit of Vector Graphics Output
1
ArrayPlot rasterization to PDF blurry

113
Exporting graphics to PDF - huge file
6
My black text isn't black after exporting to PDF
33
Graphics elements do not line up perfectly in exported PDFs
5
How to feed parameters obtained from direct 3D manipulation back into Manipulate's controls?
6
Export grid of figures (not GraphicsGrid) to pdf
4
Remove Resolution Limit of Vector Graphics Output
4
Bug in Export of figures with PlotMarkers?
2
Dashed arrow without dashed head after export