Are there suitable versioning systems for Mathematica notebooks?

I am considering a project using Mathematica and openCL. I know that the openCL C source code can be tracked.

Has anyone used a versioning site or software so multiple developers can modify a common notebook? Is it possible to:

First, if you want to have a team working on Mathematica code, then you really should do it properly and use Wolfram Workbench. As pointed out by Leonid, notebooks are not the right tool for software development.

This said, I have used version control (git) with a notebook and successfully merged versions. To do it, I minimized the amount of metadata in the notebook by:

but clearing the existing notebook history (removing all of the CellChangeTimes cell options) is easiest using the provided dialog.

Outputs can be long and messy and normally don't want to be tracked by your VCS. Some input/ouput combinations I did want to keep, so I set the output cell option GeneratedCell->False and then both cells' options to make them non-deletable and non-editable. The rest of the output cells were removed using the Delete All Output menu option.

Finally, keep your notebook(s) well organised with sections and subsections so that work and changes are clearly localised, which will make possible merges easier.

If you plan to start a project with several developers involved, I would not base it on notebooks, because, as was mentioned by others, notebooks contain too much metadata. If you open a notebook file in a text editor, you will see that the actual code in the input cells only occupies a small fraction of the total file's size.

Besides, notebooks are aimed at a very different goal: explorations, interactive visualizations, and perhaps rapid prototyping. They are not aimed at structuring and maintaining code bases, at least not without some extra framework built on top of the core notebook interface.

I would definitely recommend the toolchain containing Wolfram Workbench (which is based on Eclipse and integrates with CVS and SVN), Mathematica packages,and the MUnit package for unit tests. Packages contain just code, are in plain ASCII files, and are well-suited for versioning. Developers can still use notebooks for interactive development, but I would not do shared work with notebooks. I would rather use them in two other capacities where they shine:

Of course, I don't mean to suggest that notebooks should never be shared and jointly modified, but if you reduce that to a minimum, you will avoid most of the merging problems involving them.

The bottom line of my message here is that code should be separated from the environment which has nothing to do with the problem that the code solves directly. The less metadata you will have hanging around the better it will be, because this metadata creates serious mental overhead for the developers. For any project except most trivial ones, this overhead will actually be much larger than the one associated with learning and using Workbench and related tools. And, the Workbench is integrated with Mathematica /FrontEnd sufficiently tightly that you don't lose the advantages notebooks give you - interactivity, rapid prototyping, etc.

I lack the reputation to comment on a different answer so I must write my own answer (how perverse!).

Let me add to what simon wrote.

Second, it is possible to programmatically clear the CellChangeTimes from a notebook. Here is one approach:

The last three commands come from inspecting the system file ./SystemFiles/FrontEnd/SystemResources/HistoryOverview.nb in the Mma distribution; that is the code for the palette which lets you inspect the CellChangeTimes.

A new possibility is to use mathematica-notebook-filter which parses Mathematica notebooks and strips all output cells and metadata so that these are not committed into the version control system.

In the specific case of git, it is quite easy to integrate mathematica-notebook-filter so that git automatically cleans the output and metadata when calculating diffs through the use of gitattribute filters. You will need to have mathematica-notebook-filter filter installed and added to your path variable (or adapt the configuration below to point to the binary) and add the following line to your ~/.gitattributes file:

This instructs git to parse all files matching *.nb with the dropoutput_nb filter which is defined in your ~/.gitconfig as:

If, for some reason, you want to have a specific Mathematica notebook committed with all output and metadata, you can disable the filter in the project's .gitattributes file by adding:

Disclaimer: I am the author of this tool. It is open source and feedback (both good and bad) is appreciated. Contributions are welcome on Github.

Not a full answer, but too long to fit in a comment, will delete when this is settled. Also notice that Eclipse > 3.7.2 doesn't work with the Workbench plugin. The setup Eclipse+Workbench plugin+SVN works well when sharing packages (.m) but I have little experience doing it with notebooks.

I setup a quick example trying to answer the comment by @Nasser but I'm not sure if this is satisfactorily; please see first screenshot.

Regarding merging, I think there is at least a basic functionality; again, not sure if this is exhaustive enough; please see second screenshot. 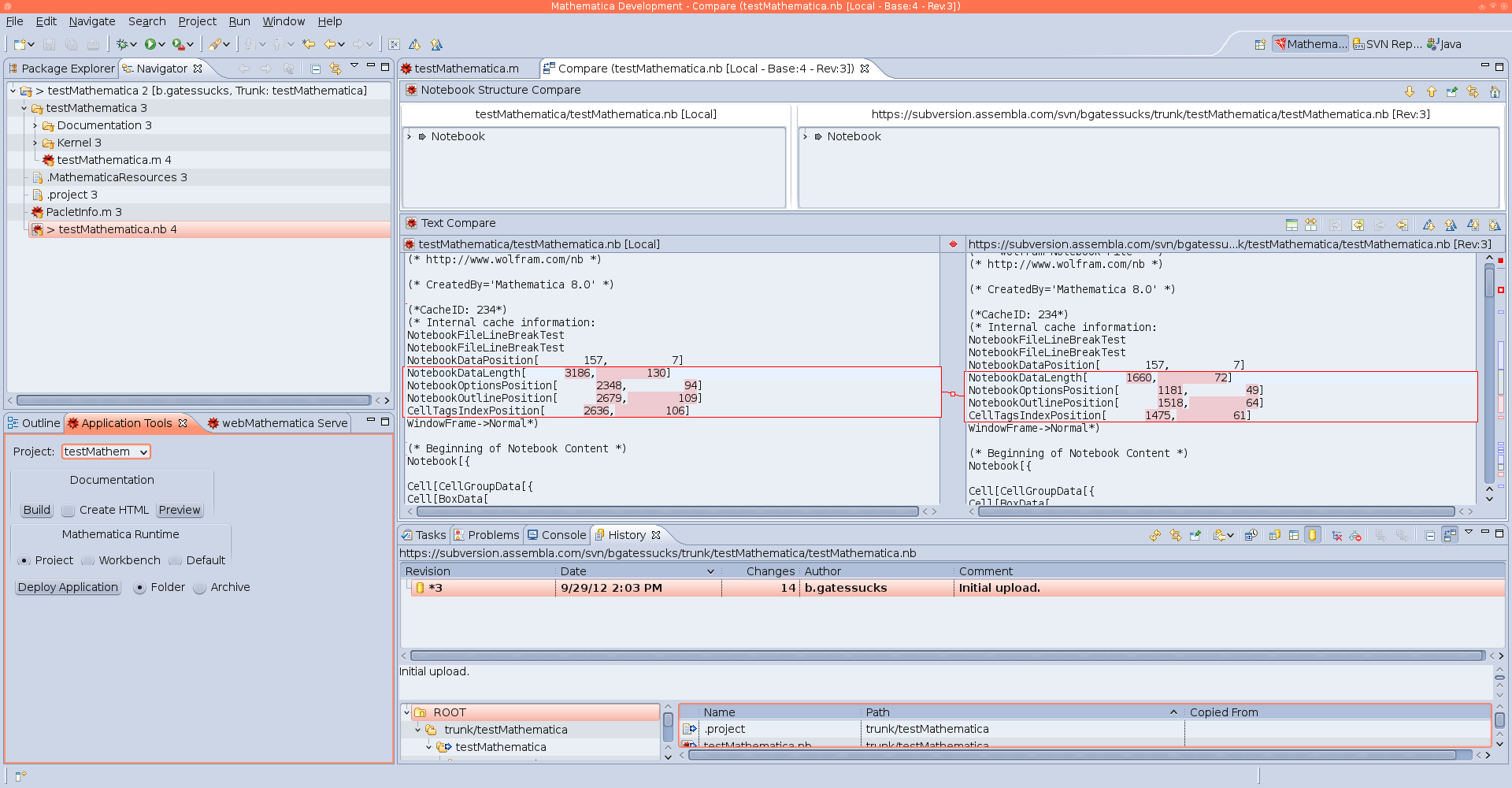 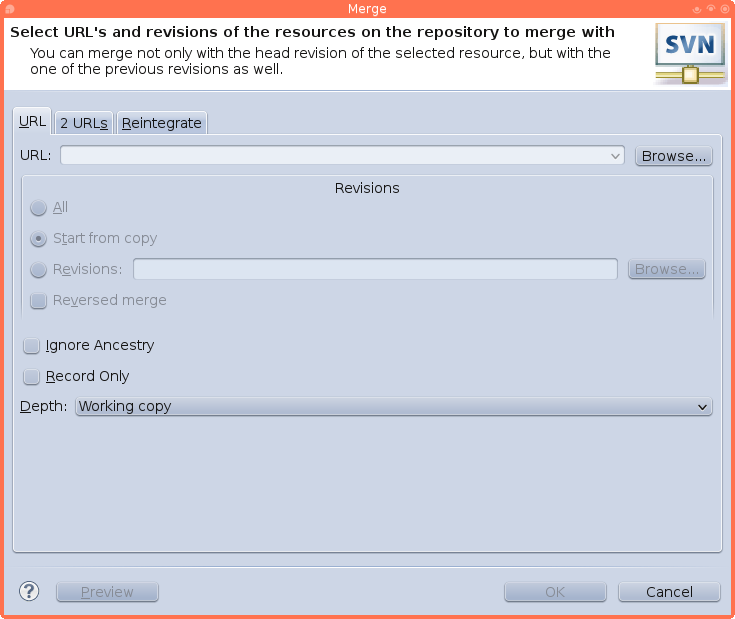 7
Does Dropbox sync smartly notebook files?
586
Where can I find examples of good Mathematica programming practice?
104
What are the recommended settings for git when using with Mathematica projects?
42
How can I set up a versioning system within a notebook?
27
Using the Wolfram Language in a Commercial Product
20
How to effectively diff a notebook?
13
How to share a notebook?
4
Feedback for my autosave-script

59
Are there any cases when For[] loops are reasonable?
31
Relative paths for portable notebooks in Mathematica
27
Attaching a file to a notebook
42
Getting serious about Mathematica programming
7
How to get the list of notebooks that are automatically opened when Mathematica starts?
27
Using the Wolfram Language in a Commercial Product
0
Are PDF Archives of Notebooks; Good Idea
11
Solutions for searching over Mathematica notebooks?