In this previous question we see that RegionNearest isn't quite as 'capable' as Nearest for some things.

Similarly, I need to be able to find a given neighborhood of points on a MeshRegion. With just a set of vertices, one can easily use Nearest with the form Nearest[p,{nDesired,radius}]. Unfortunately, this does not work with MeshRegion, RegionNearestFunction, and friends. For example-

Obviously, I can use Nearest[] on the mesh coordinates and get an answer -

But this doesn't take advantage of the graph-connectivity in the MeshRegion data structure. The meshes that I deal with are much more complicated than a simple sphere here, so the Norm[p-q] method it uses in this case gives bad values when there are 'creases' or 'folds' in the surface.

It would seem that getting the n-Ring neighbors of a point p on a MeshRegion should be a pretty straight forward thing (I have plenty of code that does this for GraphicsComplex style data) and maybe even something that should be built in, but I can't quite figure out how to do it (or traverse a MeshRegion as if it were a Graph for what that's worth.) Does anyone have a suggestion for how to take advantage of the new ...Region features for this sort of thing?

(n.b.- more specifically, I need this information to compute the differential geometry at all discrete v in r or, even better, an interpolation for any point in r. I've been playing with some of the new Computational Geometry features but can't quite figure out how to do this on MeshRegions. I again have some code that turns meshes into nonuniform-interpolated functions that I can play with this way, but, again, would like to find a way to do, say, ArcCurvature, FrenetSetretSystem sort of things on surfaces instead of just lines. See this mercifully closed question of mine for related angst.)

If you don't mind using undocumented stuff, you can access lots of useful properties by converting the BoundaryMeshRegion to a MeshObject. In this case "VertexVertexConnectivityRules" is useful. Here I start at vertex 1 and go up to 4 steps out along the mesh edges: 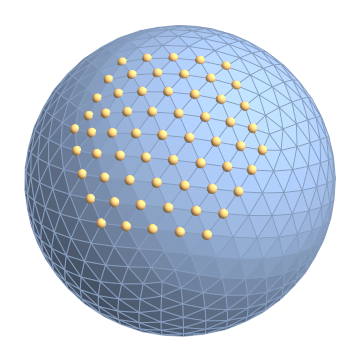 Alternatively, to get the connectivity graph you could extract the edges with MeshCells:

Then use standard graph functions 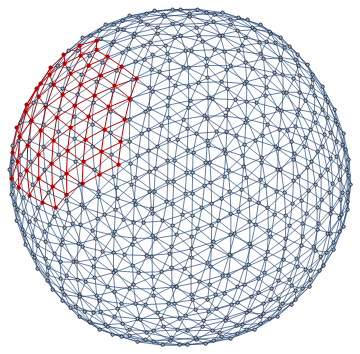 Not the answer you're looking for? Browse other questions tagged computational-geometry regions mesh geometric-computation differential-geometry or ask your own question.

8
User-defined DistanceFunction for RegionNearest
12
How to display MeshRegion without vertices
13
What are some useful (or hidden) properties of MeshRegion?
5
Intersection of a MeshRegion and InfinitePlane
29
How to speed up estimation of Mean and Gaussian curvatures on triangular meshes?
18
Estimating Principal Curvature Directions on Discrete Surfaces
1
Creating a MeshRegion object from a Graphics object
35
How to perform Loop subdivision on a triangle mesh with Mathematica?
0
Unwanted scaling when overlaying GraphicsComplex graphic onto image?