Say you want to solve the movement of a particle in a viscous fluid such that the force on the particle is zero. In general, the solution is trivial since one has no-slip boundary conditions, ie the fluid moves at the same velocity as the particle.

The question is then, how to solve Stokes equation for those particles with the boundary conditions on the particles such that the force on them is zero and they move with a certain (unknown) velocity.

One can solve for Dirichlet condition on the particle like this

Now, say you want to impose that the integral of the function over the particle is constant, something like this:

This is what I understand for an integral boundary condition and this won't work. For what I could find online seems that mathematica cannot deal with this atm.

Now, the condition of force=0 on the particle is slightly more complicated. First we need to remember that the force acting on a surface due to the fluid is $F_i = \sigma_{ik}dA_k$. For the sake of simplicity let's say that the force is only in x direction, so for the case of our particle we have that

is the force acting on the particle, with the stress tensor components given by

That's an integro-differential boundary condition and it's what I need to solve. I have a way to to do this which consists of iteratively, given the slip velocity on the particle, I start with a velocity, solve Stokes equation for that boundary condition, and compute the force. If the force is negative I need a larger velocity and if it's positive a smaller velocity. Eventually I reach the velocity where the force on the particle is zero.

However, what I would like to do is to pass the boundary condition to NDSolve just like this:

too much to ask?

I'm answering my own question since it may eventually help somebody else who is facing a similar problem.

In this case since the equations are linear on the particles' velocities one can find "easily" the one that makes the force zero.

This is how I'm doing it.

First, let's put the problem in abstract terms and for only one dimension for the sake of simplicity.

We have that the force on the particle $i$ is linear in each of the particles' velocities.

Having found the dependence of the force on the particles' velocities one can impose now that the force on both particles is zero: $$ M.U = -b$$ whose solution for the velocity is given in terms of the force evaluated at the base vectors. In Mathematica:

Where f[i][e[[i]]] is the force acting on the particle i obtained by using the corresponding velocities in the Stokes equation from the question.

In the general case where the equations are not linear on the particles' velocities one needs to make a minimization routine that finds the configuration that makes the force zero, say for example with a steepest descent method. This would be even more computationally expensive.

As requested by user21, here is my code.

First, I need to explain that I'm solving the phoretic interaction between colloids. The particles are platinum spheres in a solution of peroxide water. The surface of the particles reacts with the peroxide water and produces hydrogen. This generates a concentration field for the hydrogen having as sources the particles. Gradients on the fields will induce forces on the particles such that there is a solute-mediated interaction between them. Here's the paper you want to read if you are interested: review of phoresis

Let's take the case of the two equal particles so the minimization problem is unidimensional. Without loss of generality let's assume the particles repel each other. A diagram of the situation may be useful. 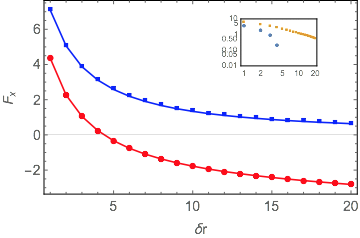 This is the force for the $U=0$ (blue) and $U=1$ (red) as a function of the distance between the particles. The force decays in my case because the gradients of the concentration field decay with distance (on the very long range the solution to the concentration equation is almost the sum of two independent sources). Furthermore, the red curve changes it sign since for any positive velocity there is a distance such that this velocity is larger than the critical velocity. Or said another way, $U=1$ is the critical velocity (the velocity for which the force on the particle is zero) for $\delta r = 4$.

I hope you are not lost. I make all this introduction because this is not the general kind of boundary condition that one solves, and I want to give the rationale behind it.

When you have both force1 and force0 you can obtain by u = force0/(force1 - force0) and it looks something like: 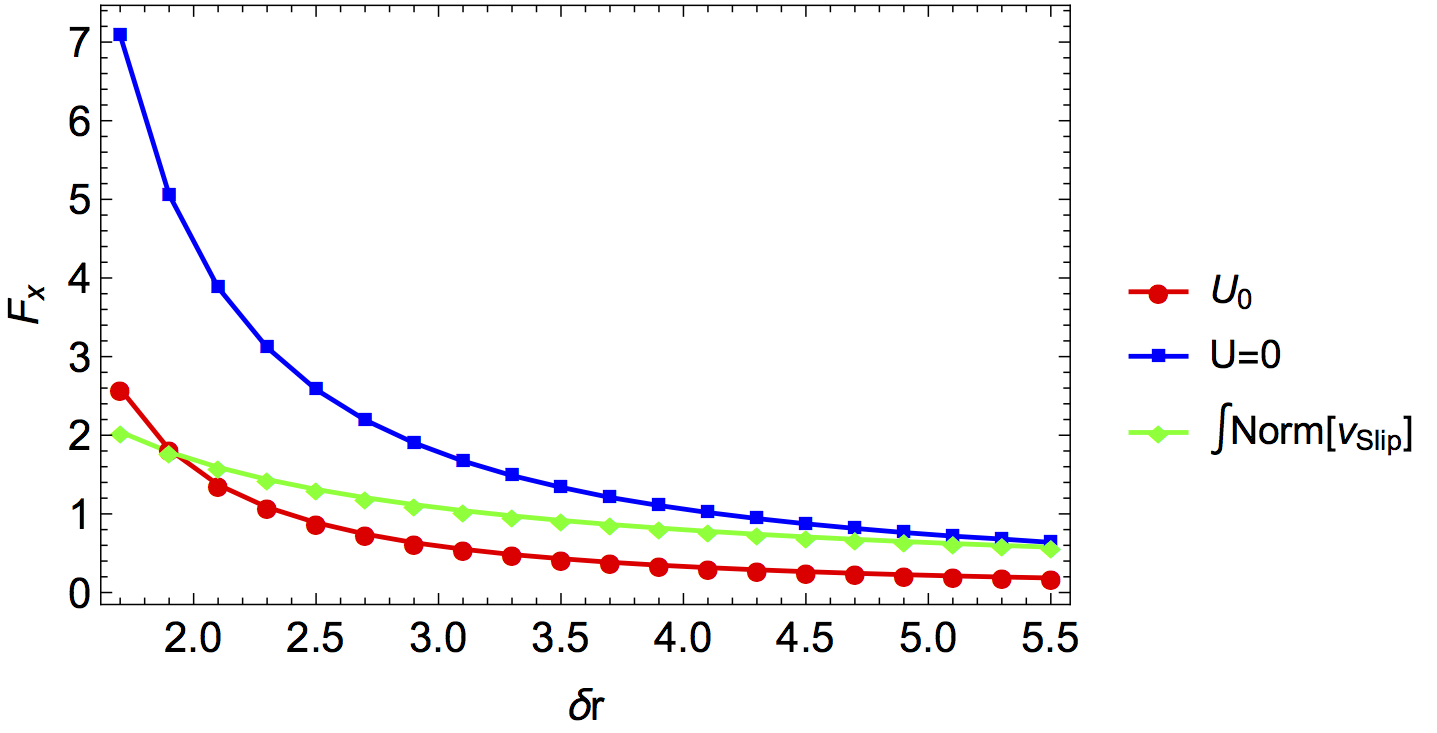 In blue force0, red is the critical velocity that makes $f=0$ on the particle and green is the currently used model. Force and velocity are in the same plot since we are in the low reynolds regime.

(sorry for the plots with different axis but this is still work in progress.)

Not the answer you're looking for? Browse other questions tagged differential-equations finite-element-method or ask your own question.