I have an expression with lots of variables, and I would like to make several plots of the expression, where the axis in each is a different variable. The idea is to put them side by side inside a Manipulate structure that lets me move around the values of the rest. But I am having problems with order of evaluation, because sometimes the value of x gets substituted in before Plot gets a hold of it.

Here is an example. Let's say my expression is x^y. The following code works perfectly, and is an example of what I am trying to make more modular: 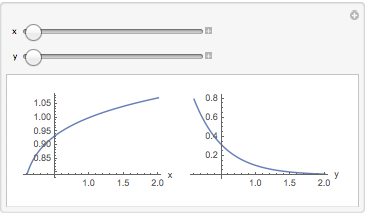 It works, I believe, because the first Plot looks for its variable x and scopes the x in x^y as local (something like FE`x$$1010 before Manipulate gets to substitute in the value from the slider. (Is this right?)

Now, in my application, the expressions to be plotted, and the variables and range against which to plot, are more dynamic. Here is my failed attempt at this:

(I left out the AxesLabel because I'd first like to get the basic piece to work, though if any solution-writer wants to make that and other plot options work, I'd be impressed.)

I also tried using Thread instead of MapThread, which actually mostly works, while throwing errors: 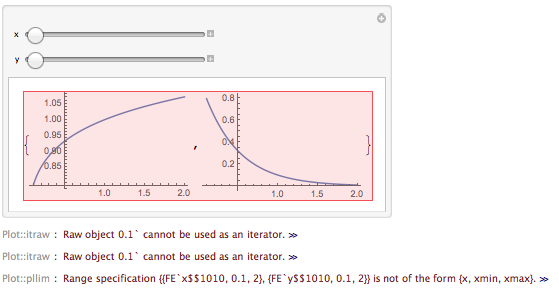 I think the solution involves holding the variable to plot (x and y respectively) but not the others, I haven't been able to implement this. I tried to make my own version of MapThread with the attribute HoldAll, but that won't do because the variables other than the x-axis ones (y and x, respectively) do need to be substituted for their values from the sliders before Plot gets a hold of them.

It would be ideal if the solution could take named arguments in a list too, as in setting plotLabels={"title1", "title2"}, and having plotLabels be another list argument passed to Plot. But Thread isn't set up to deal with named arguments, as far as I know.

Also, in my example I plotted the same x^y in both figures, but in general the entries of exprsToPlot may not be the same.

From the OP comments the slices (or contours) of a multi-dimensional function is what is being sought.

As you've noticed both Plot and Manipulate are scoping constructs. And the problem is that you want to manipulate expressions that contain variables which are meant to be scoped and where is a naming conflict.

What you want probably is possible but I think the fastest solution is just to avoid naming conflicts:

Both Edmund's and Kuba's answers provided the key, which was just to substitute a different variable (like var or xp) that Manipulate won't touch. With that key, I created something more modular, using a Module structure to specify just once at the top which plots to make:

A few points about this:

About why I wrote it this way:

It shouldn't be too difficult to further extend this into a function. And in fact it may be easier because you could define the function f , rather than initialize it at the bottom based on an expression (so no need for varsAsPattern).

Not the answer you're looking for? Browse other questions tagged plotting manipulate evaluation scoping or ask your own question.

242
What are the use cases for different scoping constructs?
0
Create a table of plots in manipulate with redundant variables