I frequently have this graphics output problem :

I draw a 3D curve using NDSolve, and depending on the initial data, there's no way I could predict the shape and extent of the curve in 3D space. In the ParametricPlot3D code, I could use PlotRange -> All to show the whole curve, but then the 3D box isn't centered on the origin : {0, 0, 0}. Rotating the view is annoying in this case. I could use something like

but most of the time the box is too small or too large to display the whole curve. The scale isn't adequate and there's no way I could predict in advance which scale should be best to show all the curve (and no more useless space, since it could be a pain to zoom in).

Using FindMax, I could find the fartest distance to the curve, from the origin, and use that value in PlotRange, but this may have a strong impact on performances in a Manipulate box (depending on the curve/solution complexity). I much prefer to use another way to show the whole curve.

So my question is this :

Using PlotRange (or another option ?), how can we tell Mathematica to show the whole curve, while maintaining the central view position on the origin ({0, 0, 0}) ?

EDIT : An example of a curve not centered on the origin :

I need to show all that curve, while fixing the view centered on the origin, and have a symetrical box all around the origin.

first make the plot and use AbsoluteOptions to get the range:

now combine the plot with a sphere ( or a cube or whatever ) that is centered and encompasses the figure.

You can set Opacity[0] here if you don't want to see the sphere at all..but I think it sort of helps anyway.

drawing axes is another option:

If I got that right I suggest the following solution for your example:

Now, play with the ViewAngle to adjust the angle of view... 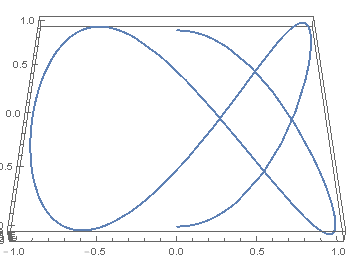 Not the answer you're looking for? Browse other questions tagged plotting graphics differential-equations graphics3d output or ask your own question.

18
How to make a tight crop of a 3d plot?
2
Plotting Zeros of a Complex Variable
4
Changing the Rotate behavior of a 3D graphics
2
Manipulate - performance during 3D rotation
1
How to adjust axes of a plot
2
Passing a function into another function defined with Module and using it there
1
Change scale on a graph