How to implement Feynman function notation?

I would like trig functions to format with custom DisplayForms as follows: 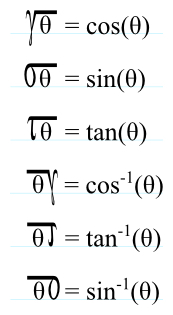 These were created by Richard Feynman in high school.

The wonderful Notation package or even low level programming with Boxes, would not work in this case. This is because you need to create custom characters and not simply custom formatting or notation from existing characters.

So first you need to create custom fonts/characters using some specialized program, then you can use the Notation package or low level Box language to assemble and interpret expressions built with these new characters.

Here's what Feynman wrote about his notation, from "Surely You're Joking, Mr. Feynman!":

While I was doing all this trigonometry, I didn't like the symbols for sine, cosine, tangent, and so on. To me, "$\sin f$" looked like s times i times n times f! So I invented another symbol, like a square root sign, that was a sigma with a long arm sticking out of it, and I put the $f$ underneath. For the tangent it was a tau with the top of the tau extended, and for the cosine I made a kind of gamma, but it looked a little bit like the square root sign.

Now the inverse sine was the same sigma, but left-to-right reflected so that it started with the horizontal line with the value underneath, and then the sigma. That was the inverse sine, NOT $\sin^{-1} f$—that was crazy! They had that in books! To me, $\sin^{-1}$ meant 1/sine, the reciprocal. So my symbols were better.

I thought my symbols were just as good, if not better, than the regular symbols—it doesn't make any difference what symbols you use—but I discovered later that it does make a difference. Once when I was explaining something to another kid in high school, without thinking I started to make these symbols, and he said, "What the hell are those?" I realized then that if I'm going to talk to anybody else, I'll have to use the standard symbols, so I eventually gave up my own symbols.

He did create a new notation which caught up: the slash notation.

Not the answer you're looking for? Browse other questions tagged custom-notation or ask your own question.

8
Override @ to mock Java Classes
1
How to enter arrows in Notation function?
17
Creating a R DataFrame like construct in Mathematica
1
Correct way to use Notation
2
Defining conditional Notation rules
14
How to implement Donald Knuth's up-arrow notation
3
How is `MakeExpression` processed by Mathematica?
2
Operator Precedence in Notation Package
0
Sequential subscripts etc. in a unified notation