plot of phase on cylinder

I would like to plot this function something like winding number as the figure attached. How can I plot this type of function using Mathematica? 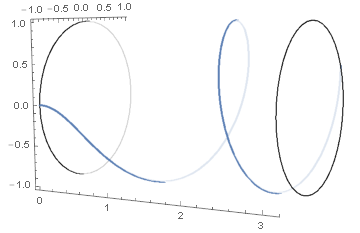 I suppose the presentation could be improved a bit by also rendering the top and bottom "edge" of the cylinder and using an orthogonal instead of perspective projection, but this gets you your graph on the cylinder.

inside the ParametricPlot3D, which probably makes for clearer code. But note that in this case the roles of the x and z axes are swapped, so you'll want to change the orientation of the Cylinder as well:

2
Plot with non-standard domain
4
Contour plot with points and line together
5
How to plot heatmap function over the unit circle
0
Curve wound on torus
3
Need help translating Mathematica code to LaTeX
1
Make a Circular ListContourPlot With Data at r increments
4
Is there a way to plot the radius of a circle that passes by three points?
2
Polar Plot Features