Building function where the output is graphic [closed]

I want to build a function, where the inputs are points and voronoimesh, and points. But, the output would be a graphics parameter. the code is following:

But, this is not working when I am showing the image. How to solve the problem? It must have to be done with function.

Here's how I would change your code, if I actually understand what you intend: 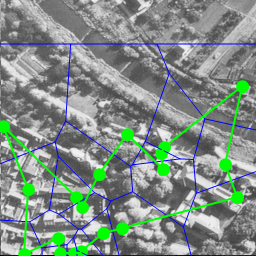 The main reason why your code was not working was scoping: you had localized your variables t16 and t17 within Block so they were not accessible from outside your cluster1 function.

Additionally, you did not really need to have two Graphics expressions; you can use a single long one containing all your graphics objects and directives.

Finally, the last three directives in your Graphics expression for t16 referred to no object and were unused ({Opacity[0.1], EdgeForm[{Thick, Yellow}], FaceForm[Yellow]}). Were you perhaps missing a graphics object there?

Since you would like to retain the separation between the two Graphics objects, you can still create them separately within cluster1 and assign them to internal module variables, then return them in a list from the cluster1 function, and assign them to any global variables you want.

In principle, you could also modify the t16 and t17 global variables directly from within the cluster1 function, but I'd advise against that: it may become hard to track possible bugs if your functions have such side effects.

For instance, the following code will return the same exact result as the version presented above:

Not the answer you're looking for? Browse other questions tagged graphics functions or ask your own question.

2
Set PointSize to pixel size
11
How to display MeshRegion without vertices
4
Superimposing ListLineIntegralConvolutionPlot with transparent noise over ListContourPlot
8
Adding colors to graphic objects made with the new function AnglePath
12
Update: Combining DistributionChart and BoxWhiskerChart
3
What is causing this function to work for some amount of points, but not more?
13
Building a Noisy Function
0
Function Domain output