Trouble creating a bifurcation diagram of a trajectory

I wish to create a bifurcation diagram of the trajectory made by $f(x,a) = a - x^2$ which shows the tangent bifurcation point and the period doubling point.

I was trying to figure it out and came up with the following code, but it doesn't really match what I am wanting since it is just a trajectory plot.

Can anyone show me how to create an actual bifurcation diagram for my function?

As noted, you didn't show a Mathematica definition of f. Moreover, the definitions of traj is incorrect, and the syntax of Manipulate is wrong. Here's a corrected, complete version:

In your Manipulate, you misplaced the right bracket ] that matches the left bracket [ of ListPlot. The control variable expressions for the Manipulate need to go outside the ListPlot expression, not inside it.

To display the current values of the controls a and x, you might want to include the `Appearance -> "Labeled" option for each of the them:

You probably also want to alter the initial value and lower bound of a, because you'll too easily get computational overflow at that initial value, and nearby values, if you decrease the value of x below its initial value. Or at least trap the troublesome values.

Just for something else:

A common way to plot bifurcation diagrams is with the parameter on the horizontal axis and the values of the stable periodic orbits on the vertical. For the function f[k] = a-f[k-1]^2, this can be done as 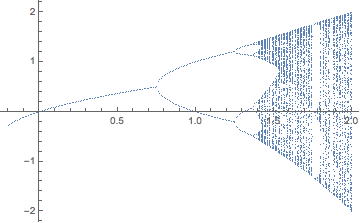 Not the answer you're looking for? Browse other questions tagged plotting functions or ask your own question.

9
How to create a version of FixedPointList for asymptotically periodic functions?
1
Using the Nest function — Confusion on my output