Some windows go off display

(I'm navigated from stackoverflow.com where I asked almost the same question)

When I want to use additional windows, let's say for example "Basic Math Input", I feel reluctant to find visually where they are in the display. So I tend to "re-open" them by clicking "Palette" -> their name.

However, when I do so, the window rearranges its position and goes up too high so that its bar (and often even some region of it that contains function panes) doesn't appear like this figure. 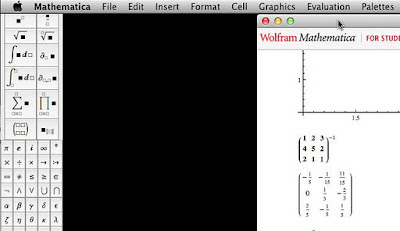 "Basic Math Input" windows lies left. With this, I have no way to move this window. Luckily all function panes are shown so it still provides all functionality but like I said earlier some panes hide often.

Tedious workaround on Mac is to arrange the displays (I'm using multiple displays) whatever. Then window's bar appears like this: 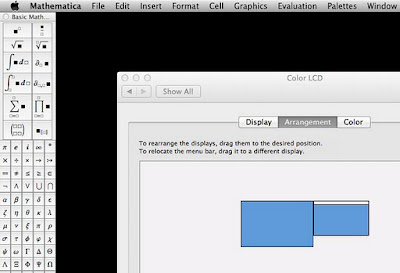 Is there any easier way to resolve this? I've seen this happens to many other additional windows that are available in "Palette" section.

I've tested Ubuntu linux 11.10 with 2 displays, and it doesn't give the same issue.

Manual approach: evaluate Notebooks[], and locate the palette in the resulting list. Then evaluate the following, with a suitable value of $i$ filled in:

I'm not sure if this is really the best solution as I don't know what causes the particular problem you are encountering, but it seems to work well enough as a quick fix. If you execute this code, clicking the button corresponding to the notebook that's gone out of bounds will make it jump to the mouse cursor so that you can move it to wherever you want it:

As you open and close notebooks, new buttons will be made available for them thanks to Dynamic. Ordinarily I might have suggested making this into a palette, but that might not be such a good idea in this case...

Did you try opening the palette, going to the options inspector, selecting it and in Windows properties, setting the location?

Unfortunately, on my Macbook here I cannot reproduce what you are describing, but you write

I feel reluctant to find visually where they are in the display.

Did you know, that you can in MacOSX with Ctrl+F6 switch periodically through all opened Panels? These are not the Windows, only the Palettes. Maybe you can prevent this issue by pressing Ctrl+F6 rather then re-opening the palette.

Not the answer you're looking for? Browse other questions tagged palettes or ask your own question.