Estimate parameters of a derived distribution

I would like to estimate the parameters of a derived distribution fSurvivalGompertzNoiseDist below.

I want to estimate the parameters of the underlying Gompertz function (which I call α and β below) by sampling from the population. As I said, to be clear, this population follows a Gompertz-survival age distribution, not a Gompertz distribution (that is for the individual age). It looks something like: 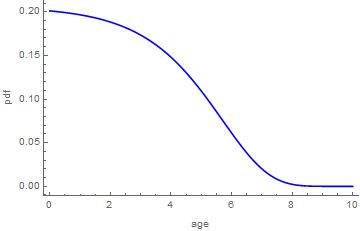 So first I define my population distribution fSurvivalGompertzNoiseDist:

I then use a slightly-differently defined distribution to generate independent samples (I simply omit the assumptions in the above):

I then try to use FindDistributionParameters on this:

Which returns the following error:

The support of the distribution TransformedDistribution...could not be determined.

The validity of the data for TransformedDistribution...could not be determined.

Does anyone have an idea as to how I can make some headway here? As well as finding the answer, speed is of the essence, as I will need to do this calculate thousands of times. I know I have Jim's answer below, but this method is sensitive to parameter initial values. So for example, $\alpha=0.1,\beta=0.0001$, the method takes a long time, and can result in fairly imprecise estimates.

I have also tried to estimate the moment generating function, but Mathematica doesn't seem to be able to do this.

edit 2: It does occur to me that, if I can't find the likelihood here, but can generate independent samples from the distribution, I could do a type of approximate Bayesian computation. Essentially I only need point estimates of the parameters, so could do a sort of least squared fitting between the actual data and the simulated. However, this would be expensive; only to be resorted to if there isn't an easier way.

edit 3: I have now managed to determine the mean and variance of the distribution. This is because $Z=X+Y$, where $X\sim fSurvivalGompertzDist[\alpha,\beta]$, and $Y\sim N(0,\sigma)$ are independent. Due to this independence I can calculate the mean, and variance of each separately, and add them to get what I want:

However, current attempts to use these with $NSolve$, $FindRoot$ etc. along with the empirical moments have failed: each function just returns the eqn. I am trying to solve unevaluated.

edit 4: I have tried to use the characteristic function, and its empirical analogue: $ecf=\frac{1}{n} \sum_{i=1}^n exp(t i X_i)$ to do a sort of method of moments as in the paper: http://www.mysmu.edu/faculty/yujun/research/yuer.pdf but I don't seem to get reasonable estimators out unfortunately.

edit 5: Since I am able to generate independent samples from this distribution, I have tried comparing the mean and variance of my distribution with that from the random samples. I do that using this function:

Then calculate the corresponding sample moments:

Now we have 3 equations and 3 unknowns:

You might also need some good initial values for the parameters.

I have now reached an answer with which I am happy. It is basically the result on tinkering with Jim Baldwin's answer (thanks again Jim!)

After calculating the mean, variance and third central moments as per Jim's method, the result is given in terms of the Meijer $G$ function. As Jim suggests, these three moments can then be set equal to their sample equivalents, and solved for the parameter estimates.

The problem with the use of the Meijer $G$ results is that they are slow, and I also found that Mathematica's solvers to be very sensitive to their starting points.

However, when I used FunctionExpand on each of the results, this yielded expressions that were much more amenable to the solvers. For example, for the mean I got:

I decided to also use NMinimize to look for solutions, since I wanted a solver that didn't depend on start point. I defined functions for each of the expanded moments, and took the square of the difference of the moment from its sample equivalent:

Generating my data using a function I define in the question, and using the above to solve for the parameters:

I get the results:

The above function seemed to work well for the majority of cases. For very low $\beta$ values, there are problems, but these are just due to the lack of identification of $\alpha$ and $\beta$.

Not the answer you're looking for? Browse other questions tagged probability-or-statistics fitting distributions or ask your own question.