Monospaced fonts are not monospaced

Bug introduced in 8 or earlier and persisting through 11.2.0

I'm using Linux-x86-64 as operating system. Can someone explain this behaviour and maybe give a hint how to resolve it? Here are two lines of exact the same number of letters of a monospaced font:

But what I expect from a monospaced font like Courier is to have the same size for every letter (and why is the line dashed anyway?). @Oleksandr was so kind to give me mental support and tried the things on his Windows machine. There the output seems ok:

What I really want is an image of arbitrary resolution of every letter. I thought when I use a combination of Style and Rasterize I can get equally sized images of them in exact the same form as they appear in text.

What I noticed is that the height of the letters is always the same, only the width varies. Looking at how many letters have which width gives here

This is a mess. Any ideas about this issue would be very welcome.

While this is not an answer, I did not want to add it as a comment. The issue is not specific to Linux, happens under Windows as well (Win7 in particular). Also, it is not specific to font: any monospaced font seems to produce overhangs to the default frame of $n$ characters. While rasterized characters have different image dimensions, as pointed out by halirutan, this is not direclty related to the problem, as most of the operator characters comply with the expected dimensions (though they will cause a lot of problems) while those characters that have larger-than-unit dimensions (like A, W, M) might fit in nicely without an overhang. So I think that the different image dimensions and the kerning problem of e.g. "_" are different issues.

For the image assembly, I would suggest using a uniform image dimension applied via ImageCrop:

While cropping individual images is a possible workaround, sadly I have no idea why rasterized characters end up being larger than the monospaced frame. The following test indicates, that this effect depends on FontSize and Magnification but not on ImageResolution:

Figure lists those rasterized characters that do not match the ImageDimension of the standard monospaced dimension (taken from "I"). Horizontal dimension: Magnification; Vertical dimension: FontSize. I would consider this a bug.

2. Monospaced characters are not monospaced

Further investigating the first issue of monospaced characters not being monospaced when printed: 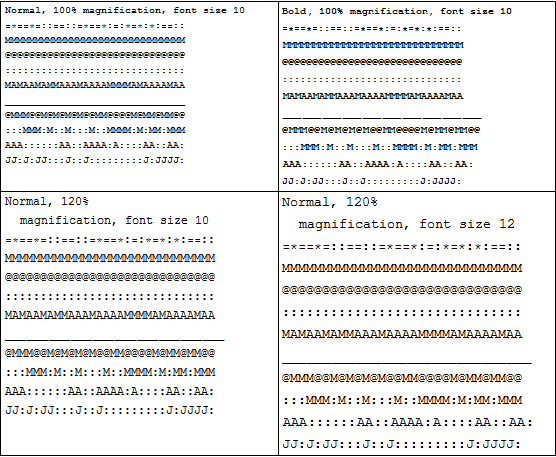 Again, I have no idea what causes these problems, but is definitely operator-character-related. Here, the problem is that no setup that is found on one machine is guaranteed to work on another, as a lot of these parameters depend on the OS.

I use the following code to get the correct output:

Not the answer you're looking for? Browse other questions tagged bugs front-end image-processing fonts or ask your own question.

24
Fontsize is too small
10
How do you change the font size of a Manipulator label?
6
Deformed style when exporting eps files
16
Grid layout problems: different sizes when rendering on Mac and Windows
9
Which fonts are supported in Wolfram Cloud?
3
MaTeX stopped accepting certain font sizes
7
Mathematica Global Menu Size
4
Fonts not rendering correctly on the cloud
1
Fonts in Mathematica