What is and isn't a valid variable specification for Manipulate?

I would like to put it inside a Manipulate to see its value as I move around the parameters. (The goal is eventually to plot it wrt one of the variables inside.)

However, Mathematica complains when I set V[1,T] as a manipulated variable:

As a workaround, if I get rid of the symbol T inside the argument, it works fine:

Why this behavior? Can anyone point me to the documentation that says what counts as a valid variable? And is there a way to get Manpiulate to accept an expression with a symbolic argument as a variable?

I suspect it's an internal decision by WRI to allow as variables only expressions of the form A[0, 1, 2], that is, a symbol with integer arguments. You could try reporting your desired functionality to WRI; maybe they will extend what expressions are allowed. Instead of being localized in the usual way, the expressions are remapped to Unique[] symbols. For instance, the expression A[0] would be mapped to a symbol like $101. In this scheme, almost any expression could be allowed as a variable, because it can be replaced by a valid variable name. One danger is that in an expression like V[1, T], the symbol T would not be localized, so if T changed value, one should expect a change in behavior. One could wish that V[0, T] were mapped to $102, but that would remove the dependency on T. From a programming point of view, this would be really bad. But if T in a user's program is an inert symbol, then from the user's point of view, it is a bit irritating not to be able to do it.

Well, with some hacking, you could do it like you want, but let me first suggest this:

The check on what is a valid variable is performed Manipulate`Dump`extendedVariable. You can add your own allowed forms like this:

This would be a little safer, but I would still recommend the first approach above:

My point seemed to be lost in the simple example I originally gave, so I have changed it and added some explanation to try to clarify the issues. My claim was and is: I'm not sure why forms like A[0] are allowed. They don't work the way they do in normal Mathematica.

A more complicated example, which might illustrate better a more practical use of A[n], is given below. But simplicity has advantages in an issue that is complicated and potentially confusing.

One reason for using variables like A[0], A[1], etc. is to be able to parametrize them by A[n]. Such functionality can often be accomplished with lists, which can be made to work in Manipulate, but that seems a separate issue. Workarounds are not an explanation. My point is that one of the basic uses of A[0] etc. cannot be implemented in Manipulate. 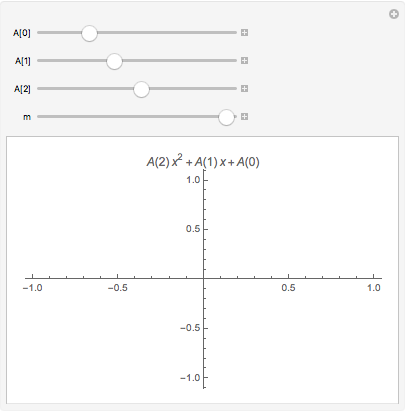 A workaround for the last example, for those who like them: 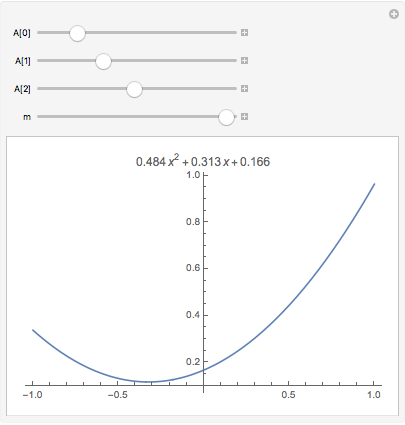 The literal occurrences of A[0], A[1] and A[2] in the replacement rules are replaced by unique $nnn in the kernel:

At runtime the rules replace the evaluated A[n] by the corresponding $nnn variable. Such a set of rules has to be applied at all appropriate places in the code. For instance it cannot be applied to the whole body, because it has to be applied to f before Plot is evaluated. In a complicated piece of code, it would be a big pain. In such an application, it would be best to avoid them. After all, that is basically what Manipulate is doing already by rewriting them as simple variables (original example):

Not the answer you're looking for? Browse other questions tagged manipulate variable or ask your own question.

0
Why doesn't my Manipulate expression work?
6
How to test whether an expression is a valid variable?