I am trying to set up a Mathematica script so that it runs from the command line in the manner that a sane person would expect. I have the following at the start of the file:

which lets me run my script from the console like so

(after chmod-ing it) and I retrieve the various arguments like so:

(I have 4 arguments; I forget why the Table is 10 slots long, I must have had a reason for that...) and then I can use them like

and so on. Another innovation I learned of (from this question: How to abort on any message generated?) is the following:

which I use to make the script abort when something goes wrong, to prevent it going completely haywire as Mathematica is wont to do.

So now to the next step; when the script dies due to some problem occurring (as picked up by the above messageHandler), I would like to know what line number of my input file caused the problem. I found the following comment on an old mailing list (http://forums.wolfram.com/mathgroup/archive/2008/Jul/msg00091.html)

Mathematica is very good at reporting that you've made an error, but it doesn't tell you where the error occurred. Is there a way to obtain the "stacktrace"?

Many thank in advance!

to which the only reply was

if you write your code in a *.m file and read it in, Mathematica will report the error line number.

So ok it sounds like Mathematica can do it somehow, but it sure doesn't do it by default when I run my script from the command line rather than import it into a notebook. So is there a way to "switch on" such behaviour? I also found the following question on the topic: Finding a Specific Line in a Package but I don't quite see how to apply that to my scenario, and it seems like it might be overkill anyway.

Lots of hassle to get sensible batch job behaviour! I have further issues trying to get it to print output in a readable/parsable one-line format (rather than all the stupid multi-line formatting that it does by default for fractions etc; see Set form of all output to InputForm) but perhaps that is for another question...

edit: Ok, it seems like sometimes Mathematica does decide to give me a line number for the error, e.g.:

which is nice, but it doesn't do it all the time.

Mathematica will report the line number of syntax errors when reading the code from a file. These errors come directly from the parser, not from the evaluator.

Most computer languages, even high-level scripting languages, encourage a source-file based workflow. First type your program in a source file, then run the file. Mathematica is different: most of the time code is evaluated interactively, and there is no source file at all. Definitions can be easily issued (or modified) programmatically, so there is no good way to associate textual input lines with the actual code.

The built-in debugger suffers from this problem too: it does attempt to make this association. For example, it allows setting breakpoints directly in the code that was typed in the notebook, and when evaluation is interrupted, it attempts to highlight the piece of code where evaluation has stopped. This will inevitably fail in many cases because during a typical workflow code in the notebook changes continually, and the link between the code and the in-memory program always gets broken. In my opinion, this is the single major source of the builtin debugger's bad reputation (which I don't agree with). I do find the debugger quite useful for as long as I avoid trying to treat source code as something that directly corresponds to the in-memory program. That is why I advocate not using breakpoints at all, but instead triggering a break using an Assert inserted directly in the code.

Why do I find the debugger useful? One of the big reasons is that it shows the stack and it allows inspecting local variables. So it is possible to show a stack trace, and determine the location where the message was issued! How can you do this in your script? I would modify the message handler like this:

Just print Stack[] or Stack[_]. StackInhibit simply prevents the messageHandler from being included in the trace, and can safely be dropped.

This is how it works: 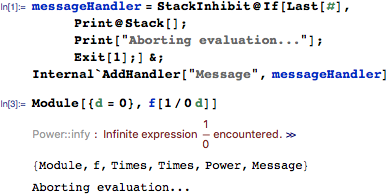 It will show that the message was issued from inside Times used in f, which is in turn used in Module.

Finally, note that one big caveat with aborting on any message is that a message is generally not an error. Messages are used for many purposes, just as warnings or showing useful information.

Not the answer you're looking for? Browse other questions tagged warning-messages scripting command-line or ask your own question.

86
How to abort on any message generated?
20
How does the built-in debugger decide what to highlight?
15
Finding a Specific Line in a Package
1
Set form of all output to InputForm