I want to make the output of Image3D much smaller. For example 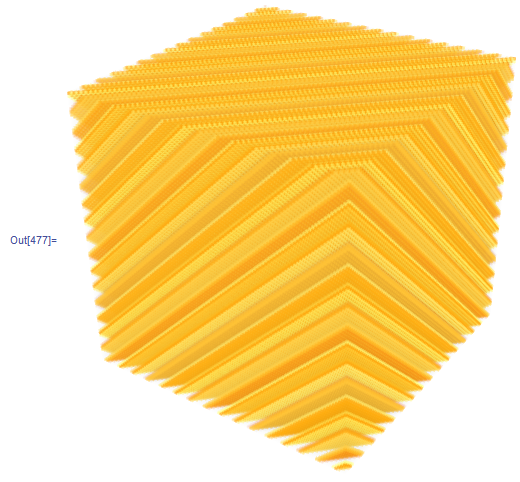 We can look at how much memory this image takes

If I want to generate many such kind of image3D in a notebook for studying. The notebook will become very large.

I notice in the "interactive example" section of "ref/Image3DSlices", there is a delicate image of a human head (NMR??). Which only takes up 0.9 MB.

So I was wondering how to make the output of Image3D smaller?

I also want to know what is the usage of ImageResolution in Image3D? I tried it, but I didn't see any difference after using it.

There are several ways to reduce the size of the image. Perhaps the simplest is to reduce the number of pixels when it is generated. For example, if you do:

Then you get an image that looks much the same and the memory is 0.3 MB

If you want to make it smaller after the initial image generation (or to make an imported image smaller) then you can downsample:

Both of these decrease the resolution of the image. If your data is real-valued, then you can also reduce the size by storing the image data as integers. For example, the CT scan of the head is a 100x100x100 image that takes up only 1 MB (instead of 7). This is accomplished by storing the image as integers instead of reals. This can be done by changing the second argument of the Image3D:

Not the answer you're looking for? Browse other questions tagged image image3d or ask your own question.

34
How to place an image inside a notebook, with the minimum memory footprint?