I have written a notebook but in order to edit it, I prefer 125% magification or even 150%.

I know Window>Magnification. Also there is a small symbol on the right bottom of the notebook, where I can influence this setting:

However, on this particular notebook (with quite some editing work in it!)

P.S.: I just moved a picture which I had pasted into a notebook cell together with the enclosing cell to another place in the same notebook. Then over a sudden, the magnification switched from 125% to 90%. And 90% is not one of the magnifications offered from the list (I know, you might use OptionsInspector to set it to any value).

Why this strange value? Why the change at all?

P.S.: after this has happened, the quirky behaviour of the front end is back where it takes very long to change the magnification. It looks like moving the cell with the pasted picture reproducably sends the Mathematica session into "keine Rückmeldung" on the Windows-level.

PP.S.: The graphics moved in the trial before did not fit on the whole screen. Even with 100% magnification it was a bit higher. I tried the operation again at 75% magnification. Then it fitted on the screen. Then the movement of the cell worked without sending Mathematica into the quirky behaviour. After this modification, I could change the magnification and that worked almost instantaneously.

To set the default magnification for a notebook: 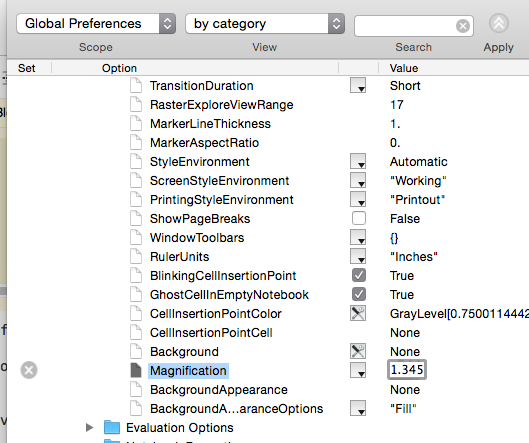 Not the answer you're looking for? Browse other questions tagged front-end magnification or ask your own question.

13
Bug in handling backslashed Cyrillic symbols in v.10.0.0?
3
Strange evaluating indication of output cells
2
Why can't I change the Magnification in Printout Style in Default.nb
6
Automatic shading of all InitializationCell->True cells in older versions
3
How can one programatically change Magnification or select others than offered?
7
Mathematica v 12.1.1.0 FrontEnd Autoformatting Bug (?)