RandomGraph[{n,m}] generates a random graph with $n$ vertices and $m$ edges. I want to generate a random bipartite graph, like RandomBipartiteGraph[m,n,e], where I can specify the number of vertices in each partition $m,n$, and the number of edges $e$. How can I do this?

But I wonder if I can do it with some of Mathematica built-in graph generator functions?

Also, this is very slow if $m$ or $n$ are large. I am generating the list of all posible edges, which is a big waste if in the end the actual number of edges is small.

Here is my fast entry: 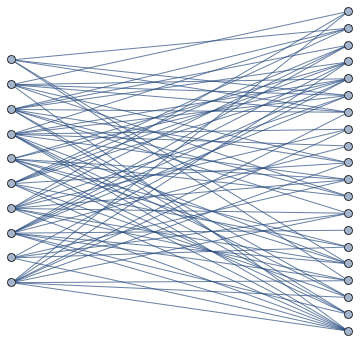 Here is my simple entry:

IGraph/M has two functions for this since version 0.2.0.

IGBipartiteGameGNM[n1, n2, m] generates a bipartite random graph with n1 and n2 vertices in the two partitions and m edges.

Use this when you know how many edges you want exactly.

Use this when you don't want to fix the number of edges, but instead each edge is present independently with probability $p$.

These functions have two special options: 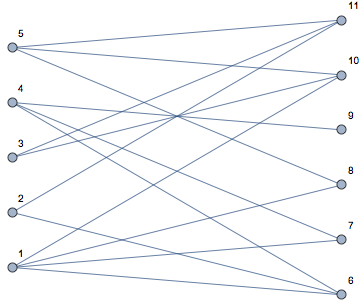 Workarounds: use IGBipartiteQ for testing bipartiteness and use IGLayoutBipartite for visualization.

Not the answer you're looking for? Browse other questions tagged graphs-and-networks random or ask your own question.