How to improve the typesetting of mathematical contents

Until I started diving into Mathematica, I was not using much computer software for symbolic computation. I did my analysis by hand on blank sheets, the calculations using Python or MATLAB, and the computer typesetting and presentations using LaTeX.

Mathematica could be (at least) a great supplement to each of these steps. However, I am frustrated by Mathematica's rendering of mathematical notation.

I got Mathematica (8 on Mac OS X) to automatically display unreadable variable names in a nicer mathematical notation, but the output in notebooks is quite bad:

I take as reference the equivalent in LaTeX:

The official documentation on Math typesetting boasts Mathematica's "world most sophisticated tech", but it doesn't explain much about how to automatically adjust spacing or the fonts used.

Is there another typesetting guide I'm missing? Maybe downloadable stylesheets that redefine spacings and make use of Computer Modern or other high quality fonts? I would not have time to write my own stylesheet, I have no idea how to even begin, so a ready-made one would be preferable.

EDIT in response to answers: Here is an example of TraditionalForm side-by-side with the equivalent LaTeX output. There are clearly some differences in spacing, not all bad. The LaTeX version is more crowded around the fraction bar, while the Mathematica version is a bit too tight between the integral sign and its upper limit. Operators like $+$ are a bit smaller in the Mathematica version, too.

To format all your output expressions as TraditionalForm, you can set the $Post variable as:

Here's how it would look:

To clear the definition for $Post (if you need to), just evaluate $Post =. You can add this to your init.m if you'd like to make this apply to all notebooks henceforth, but I wouldn't suggest doing that.

Open the Edit -> Preferences menu and try setting the following: 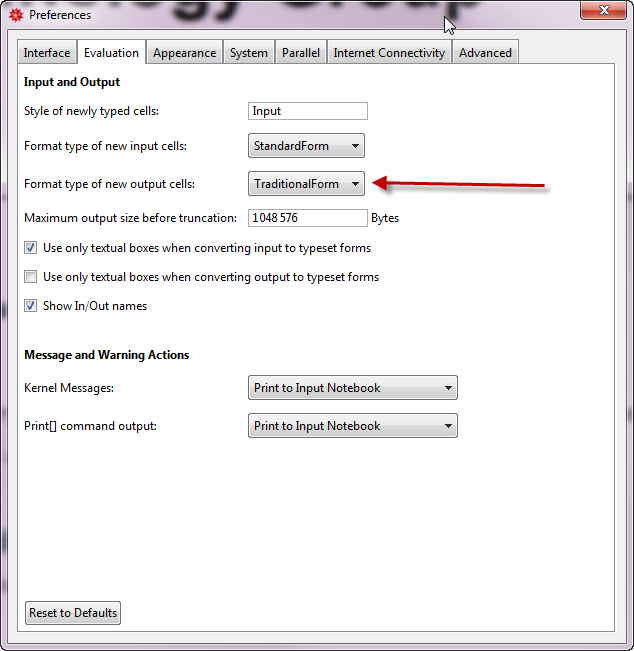 Not the answer you're looking for? Browse other questions tagged front-end customization formatting or ask your own question.

8
Can the Notation function support complex structures on its left hand side?