I have to create a Graph object, which can be manipulated by the user, though I do not want to have the Graph-specific cursor (an arrow with an UndirectedEdge symbol next to it) not to confuse the user with any extra information. I assumed this would work: 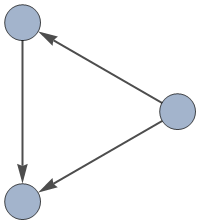 But it doesn't work. While all graphics objects and the whole graph itself are wrapped into MouseAppearance still the Graph-specific cursor appears when I move the mouse away of edges or nodes. Over nodes and edges, the standard arrow cursor is displayed correctly, as expected. Unfortunately, when I capture the screen with the cursor included, it always saves the normal arrow cursor irregardless how it looks on screen. Strange. That's why I did not include a picture with a cursor over it.

Can anyone answer the following questions?

Heike's answer has a strong virtue of simplicity, but it has two downsides. It strips the Graph-specific context menus, and it causes the output to not evaluate as a Graph if copied back to input. Here's a version which preserves those properties:

Now, simply apply StripGraphMouseAppearance whenever you want to strip the appearance in output. E.g., the example in the question would be reformulated as:

Basically, Graph typesets with the MouseAppearance built into it. My code looks for the box form of MouseAppearance and strips it out. One could conceivably rewrite MakeBoxes rules for Graph directly to do this, but doing so correctly would be a much more difficult exercise, as it would require reverse-engineering the rules we have now and carefully overriding them...and such a solution might not be stable across different Mathematica versions.

I don't know the answers to questions 1 and 3, but to get the cursor appearing as an arrow everywhere in the Graph you could wrap your graph in Show, e.g.

Not the answer you're looking for? Browse other questions tagged front-end or ask your own question.