I am trying to merge two or more financial time series. For example,

I have been able to merge them using TimeSeriesThreadas

Don't forget about TemporalData. It serves a lot of the same purposes as TimeSeries. The docs even say it "represents a collection of paths". 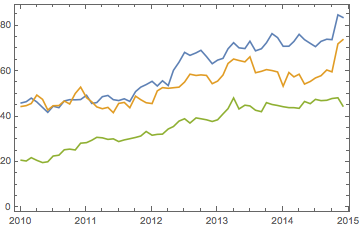 Not the answer you're looking for? Browse other questions tagged list-manipulation programming time-series or ask your own question.