best way to deploy a Wolfram Language program on a machine without its own Mathematica license?

I have written a small program that accepts a string as input and returns a List of graphical images as output. A simple example is shown below.

How best to deploy this on a machine without a Mathematica license? I think CDF is not a option because the code accepts an arbitrary string as input. My experimentation with deploying on the cloud and MailReceiverFunction has led only to errors and scrambled output. I am open to any suggestions.

Here is a trivial example

Where the xxxx is a Graphics image. In Mathematica, it looks like this:

The code works as intended on the desktop, so

And integrating it with FormPage works as intended as well, so long as I stay on the local machine.

My goal is to be able to access this from another machine, so I deploy to the web, with

But this doesn't work. Instead of returning a list of Graphics, I get

And with slightly more elaborate examples, pages of text that look like some kind of ASCII-based encoding of the graphics images. In any case, certainly not the graphics themselves.

In the simplest case the FormPage function would return a graphic: 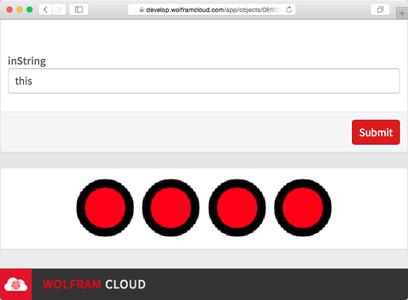 Not the answer you're looking for? Browse other questions tagged cdf-format wolfram-cloud email or ask your own question.