Shooting method — why is NDSolve giving me an error message?

I am currently trying to write a code to implement the so-called shooting method (I've given a brief description of it below, for those unfamiliar) for second order ODE's in the form

We have a function, $y(t)$ given by the equation of motion, with a constant initial velocity $v_0$, and a different function $y_\text{shot}(t)$ which describes the trajectory of the same particle in a different situation (i.e. for different $v_0$.) Therefore, $y_\text{end}(t)$ describes the point at which $y(t_1)$ and $y_\text{shot}(t_1,v_0)$ have the same value at the same time, $t_1$. So, if we can find the point where both equations have the same height at the same time, we can find the initial velocity of both equations.

My code is as follows:

which produces a grah showing the intersection of the two functions, as expected, and the following error message from both NDSolve and FindRoot:

Can anyone see why this error message is being produced? It only seems to become a problem when FindRoot is involved.

This is a duplicate. You need to tell your functions that the arguments are numeric. 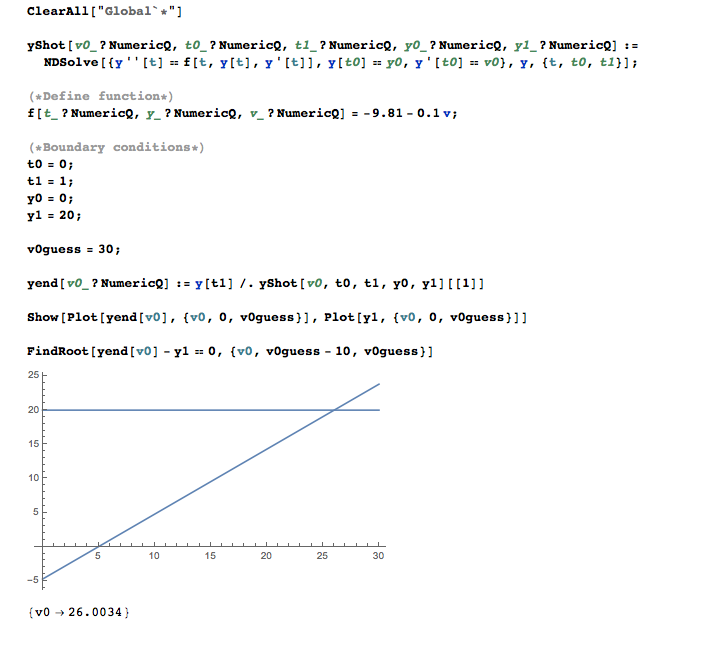 Not the answer you're looking for? Browse other questions tagged equation-solving differential-equations warning-messages or ask your own question.

2
How to set the initial condition? (to make IC and BC consistent)
3
Internal Shooting Method of NDSolve in combination with NDSolve`Reinitialize?
2
NDSolve giving the wrong solution?
5
Implement functions that depend on previous value in NDSolve
2
Problem with solving an optimal control system with Shooting Method
7
Solving stiff boundary value problem
4
NDSolve issuing boundary condition error message
2
Solution of a BVP by shooting method