Testing Grids in a Testing Notebook

I have an issue testing functions that generate formatted output. For example:

1) Create a new testing notebook and a new test like this:

2) Now execute the test (it fails as expected)

3) Now click the "Replace Output" button and run it again:

Why is it failing? Lets show the cell expressions to see if there is a hidden difference: 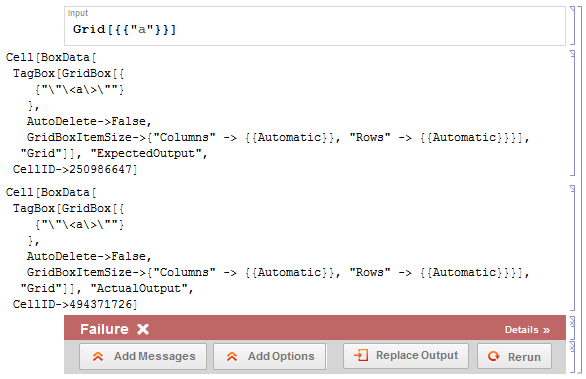 I don't see any significant difference. So my question is: is this a bug or should I do something different when testing functions that generate grids?

In the meanwhile, I have found that this works:

Testing functions that generate grids fails in this simple example:

Browse other questions tagged testing-and-verification or ask your own question.

6
Testing Graphics in a Testing Notebook