Generate a set of pairs

I am dealing with the following function

The function is given by

We define a function that generates a random point in the x-z plane that satisfies fun[x, z] > 0:

Important note: this definition is dangerous, because it is recursive. You should make sure that there are actually a good number of x-z pairs that satisfy fun[x, z] > 0 first before using this definition, because it runs the risk of running into the $RecursionLimit. As it is, it randomly generates a point, and if it satisfies the condition, it keeps it, and if it doesn't, then the function calls itself. Thus, it will eventually spit out a point if there is one to be found (or rather, if acceptable region is not too small).

Alternatively, you can define this function with a so-called "vanishing function" (named Nothing in Mathematica 10.1 and later) as

That said, we can generate a table of points via

and we can plot the function along with these points to make sure that we are generating a uniform sample from the region: 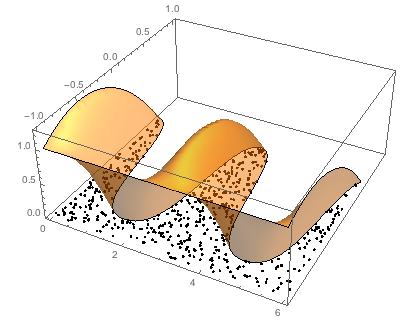 You can generate a list of random points for a given {a,b,c} using RandomPoint for region: 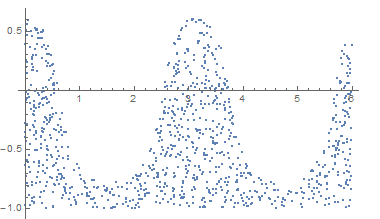